A downloadable game for Windows

Players place towers by selecting an empty construction slot and then clicking on the icon corresponding to the tower they want to build, spending the specified amount of $. If they don’t have enough $ the construction fails.

Players upgrade their towers by clicking on them and then clicking on the icon that appears on top of them (spending the specified amount of $ and failing if they don’t have enough).

Enemies all spawn from the same spot in the level when a wave countdown timer reaches zero or is called early, though their “rails” are different and scripted into the wave.

Enemies move along their rails at the speed shown in their stat block (in m/s). If an enemy meets a player controlled unit, it will stop to fight it, while the enemies behind it will continue on their path.

Some enemies have special abilities, which are described in their stat block

When an enemy reaches a unit spawned by a Sport Tree tower, it stops and the two units begin attacking each other. Units that come behind the engaged one will continue along the path normally.

Units attack units they are engaged with and deal damage = to their damage stat. There is a 15% chance a unit (enemy or allied) will land a critical hit, dealing 150% of its damage. (All damage from units is physical damage).

Towers automatically attack any enemies that come into their range, prioritizing the enemies furthest along the path (closer to the Wall). Towers can land critical hits just as units do.

When an enemy reaches 0 HP, it disappears from the map, and the amount in his Reward stat is added to the player’s funds. An enemy also disappears if it reaches the Wall, but in this case no reward is given and the player instead loses Wall Health equal to the enemy’s Bricks Broken stat.

The wall receives damage as it is reached by enemies, as shown in their Bricks Broken stat. The wall also changes its appearance to reflect the damage taken, with each stage representing the amount of stars (1-3) a player will receive for completing the level.

You can choose the level to play.

There is a button top right where all the turrets and enemies are described.

There is a button top right to pause the wave and think the strategy.

At the bottom of the tower upgrade menu there is an icon with a “$” on it which demolishes the tower and returns 40% of its total cost to the player’s funds.

Players can call waves early by clicking on the wave countdown icon, as described in the UI section.

In the grim darkness of the far future, Don Old Grump, God-Emperor of Mankind [REDACTED], and his robotic servants built a space station, with the objective of conquering the entire galaxy. But his plans would soon be stopped by an alien species native of a nearby solar system, trying to protect their homeland from Grump’s invasion. 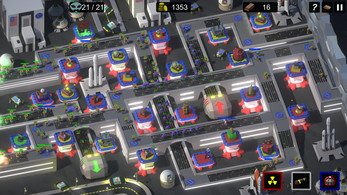 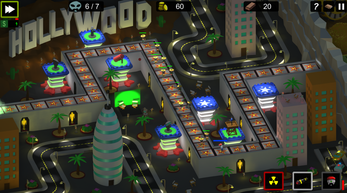 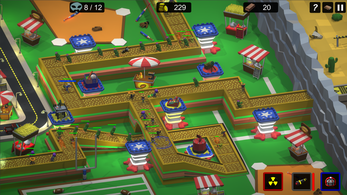 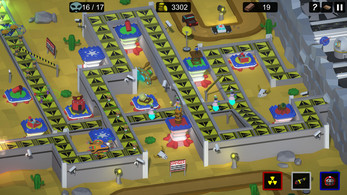 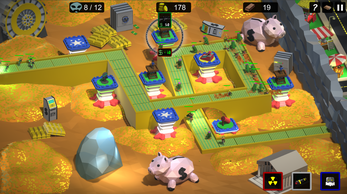