Viewing most recent comments · Next page · Last page
CoffeeAddictedGamer12 days ago(+1)
I really had fun playing this game!
Reply
Francesco Berton10 days ago

This game has a chill vibe but after two plays my fire wall picked it up as threat i thought i should bring that up.

I played a bit of the game, and it looks very interesting. I'd love to play more, but the framerate is so shit I really feel it's unplayable. It doesn't look like it uses high-end ray tracing, so I'm not sure what's going on. Regardless, I think you should have multiple graphical settings or something.

Hello! I recently played the demo and had lots of fun with it! This game looks pretty great and promising!

Here are some impressions and suggestions that I wrote after playing, I hope they'll be useful :

I love this game so

much! It has everything! beautiful graphics, amazing sound, great story, free-rome! One of my favorite games I've played on my channel! I've only made it through Day 1 at the moment but will definitely finish it!

now im sad because of you :( . i want more but there is no more and i have to wait for full game :(.

also it took me a while to make it run on linux(not to long but still), since your making this game with unity it shouldnt be a problem to release linux and mac version. but even without that i will surely buy full version :D

ps. controller support works great, only downside is i used ps3 controller so i had to first check all the buttons to see which one do what :D

This game is wonderful and has a promising future, the art style of the graphics are very well made and pleasant to look at, the mix of 3D scenarios with 2D characters was a great choice, the soundtrack has a great harmony with what happens in gameplay, the story is very interesting and I really liked the references like the "20s music" or the history of the commemorative coin. However, there are some problems like optimization, I have a weak notebook but it didn't get in the way, I just had some difficulties when loading but it wasn't a big problem, it would also be very good if the player could choose between playing with the controller or with the keyboard, so at the time of the tutorial you wouldn't have to look at the options to see which key corresponds to which button; another thing that would improve the experience in the game would be a way to better locate yourself on the map, I am not a big fan of HUD on the screen so I believe there may be a way to improve the location through the signs.
Anyway, that's all, I really hope that this project can be launched one day, it was a great experience to play the Venice 2089 demo, I would also like to apologize if something I wrote didn't seem very consistent, I'm still learning English, A hug from Brazil, have a nice day.

(I don’t know if this was a problem that happened only to me, but I decided to add it to the analysis, at the end of the demo it was a little difficult to read the names that appeared in the credits due to the blur of the movement of the scenario, you should take a look at it, after all it would be a pity that the individuals involved in the project did not receive due recognition).

this game demo is so FUN! it took me a while to get the hang of turning, but it's quality is just.. AMAZING! i can't wait for the full version to come out!

i love the game <3when you gonna translated to spanish?

The art and music are both absolutely wonderful so amazing work there. I found myself really immersed within the world due to the sound design alone and the art also stood out to me. The mix of everything is really nice. I did have a bit of trouble with loading up scenes, transitions, and movement, but that was probably due to the graphics slowing down my computer and it being laggy as always.

When the player is told what button to press to do what it was only for controller users and it would be nice to get something for keyboard users. I was able to memorize the keys after looking through the options menu. Perhaps as you develop, you could give an option to pick whether you are using a controller or keyboard so that it could display the correct controls.

Another suggestion would be some sort of mini map at the start. It was a little daunting seeing such a large area and not having much of a guide. The signs helped a little but were a little confusing from time to time- It wasn't a huge issue for me but I'm just putting it out there.

The game is definitely a good experience so far and I'm happy to see where the finished product goes in the future. Keep up the good work!

Thanks for the feedback :)

I hope this game has save progress button for more stories (i mean more days). :D

Hopefully to be implemented in the future :)

I can't configure my USB control, the buttons are wrong, and "SELECT" don't work =(

I tried to play using keyboard and "TAB" (inventory), it' don't work too.

The art is so beautiful and the music is wonderful.

Thanks for the experience (even though I can't get past grandfather).

we wrote a devlog to answer some of your questions :)

thank hope u guys get a publisher soon :)

woaahhhhh, when i downloaded this game i didnt realise it was a demo :( now i'm super sad because i got so much into the storyline, i absolutely love it and im so curious about whats happening next! when will you let us know the full version is available? ^^

so happy you liked it! somewhen next year hopefully

It looks so fun and unique, I would love to play it, but I have IOs :c

I really liked the game, is original how do you decorate your boat house, is something personal(betteween player and game) and it is kinda creative, i really liked the characters(specially Nova haha), but, i think the game needs more music, and voice lines. That´s all i think, the game is 10/10 and i will play it when it releases, i love it, good job!

Thank you so much for playing and for your feedback! :) We're happy you liked collecting trophies in Nova's boat house <3

Probably an optimization issue. We hope to fix it in the next build update! stay tuned :)

I finished the demo, and I really liked it - I enjoyed getting the know the characters, "my" boat house, decorating it with rewards and the main goal which this game seems to have, hope to play the full game in the future. I only played with the keyboard and it worked fine, had no problems at all with it

I love this game, my only complaint is on keyboard it is near-impossible to change directions. It's literally faster to put down the hoverboard, turn around, and get back on.

Good game,i enjoyed it,but theres a bug! please fix it or i cant play this,heres the bug:right when i go outside on day one all i see is black,i can only see the dialogues,but i cant see nova and the city,please fix this!

Did you fix it yet?

Probably an optimization issue. We hope to fix it with the next build update! stay tuned :)

I didn't get far into the game but I love the designs of the characters and the environment!

This game is really cute and cool imo, loved the combo of 2D and 3D arts, really good job folks.

The soundtrack was cool overall, although I found the loop for outside a bit bland over time. The idea of adding extra layers of music when collecting these shiny rings is a good idea but some of the chords used there sounded a bit dissonant to me. Is that intended.
Btw I really liked the credits song and gramps' guitar performance. Your way of integrating music with the environment was marvellous ^^

I also did not let a single bird live in this town. Cecilia was so proud of me, I can't tell ^^
Thanks for creating this game!

Thank you for playing it :)

That's pretty strange. Have you checked if your browser is blocking the download?

third day is not available yet, sorry :) the demo ends at day 2. Thank you for playing!

Does this game need high specs?

This is a very cute looking game

i loved the art style it's so cool!!

hello, could you make it available in portuguese and spanish? 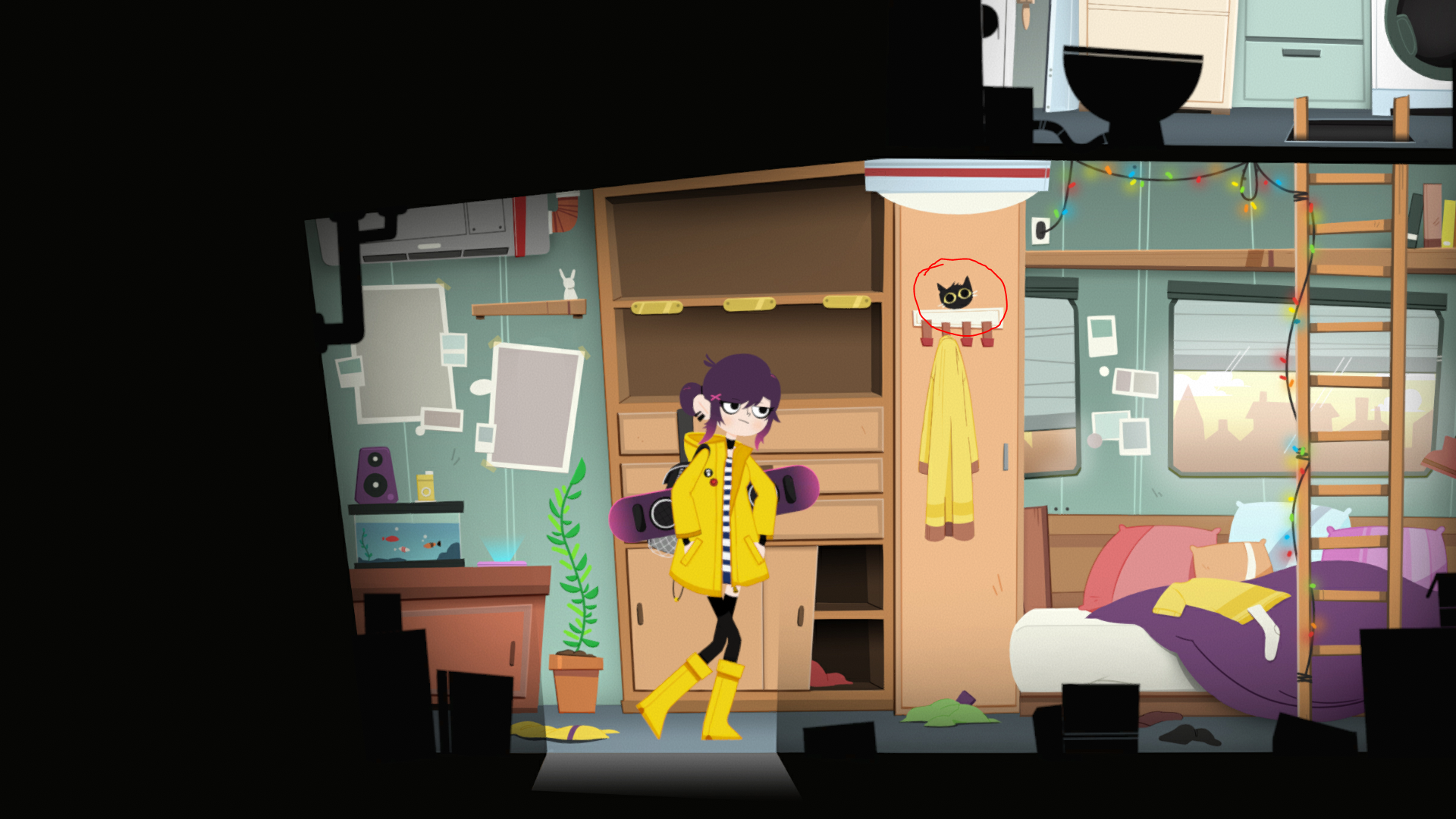 Nitw reference in the bedroom of Nova ;)

This game is fun! It's very relaxing to just skate around in the city, and there's definitely a solid foundation here.

If you're planning to make this game commercial, I would definitely suggest finding a native English speaker to translate/clean up the dialogue (assuming you don't have one). As it stands now the English is functional and understandable (and for a while I actually didn't know this was a foreign game), but there are times when it seems rather unnatural.

Can't wait to see what comes of this project :)

Looks interesting, I will try...